The Path To Recovery

About a half year ago, I suffered a severe leg injury which kept me from being outdoors with my camera.  A couple weeks of being mostly bedridden and using crutches to get around eventually gave way to being able to do some work and the start of physical therapy.  My physical therapist was hesitant about me hiking at first, so my first couple trails were relatively flat.  No backpack filled with tripods or cameras either, just a phone.  Earlier this year, I finally made a hike with all the gear on a trail that had more difficulty involved.  I could feel the difference of the terrain versus just being in therapy.  I can’t imagine how long I would have been out if I wasn’t taking care of myself before this accident, and now that we’re all being asked to stay home, I realize I need to keep moving more than ever.

While many National Parks and other recreational areas have closed, there are some which remain open.  These may not be the desired locations which attract social media throngs, but those who’ve seen my work know I don’t really go there anyway.  The first location (above) was after some areas had shut down, making this a more crowded parking lot than usual.  Despite that, I had very few people on the trail I was on, and getting here requires a scramble, so I enjoyed the place to myself.

That area has since become off limits, as has the next spot, on a hike taken in March.  While this area starts on a popular trail, it soon takes off to an old trail, which quickly fades and becomes a scrambling route.  Again, social distancing didn’t apply here because there were no other groups.

One of the remaining open trails has plenty of open space to absorb a higher number of hikers keeping distance between them.  Leaving the trail and boulder hopping the creek also provides more privacy and the best views. 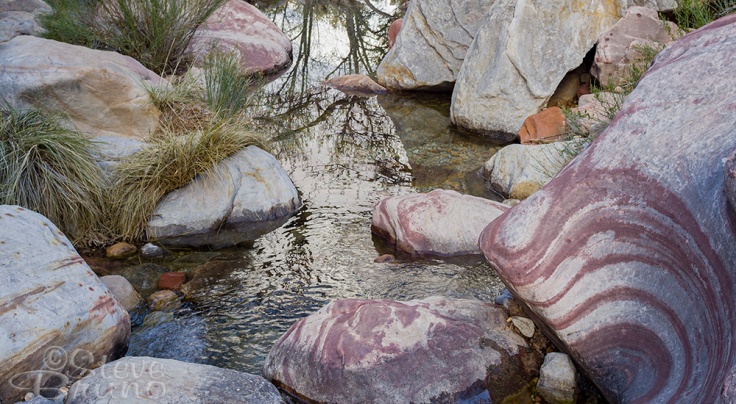 Higher up, this canyon becomes more rugged and takes on different characteristics.  While most would have a different opinion on what constitutes a waterfall, I’m going to state that this is southern Nevada’s largest waterfall.  It had been raining earlier, but only a light amount, and had been snowing above.  This probably won’t be noticeable at this size, but there are small streams of water coming down on almost all the canyon walls in this scene.  While the wall to the left is the most obvious, the water can be seen in many spots when standing here (and on my computer screen in full size).  Waterfall or not, I like how this one came out.

13 thoughts on “The Path To Recovery”