A couple days ago, The US National Park Service celebrated its 100th year.  Although many parks receive significant traffic, there are still parts of those parks where one can stretch out a little.  The east side of Zion NP is one of those spots.

Most visitors to Zion want to see the main canyon and places like Angel’s Landing and The Narrows.  As they head up the winding road and through the spectacular tunnels on the way out the east exit, many are on their way to either Bryce or Grand Canyon.  There are a couple pullouts along this stretch of road, but few spend time here.  Here’s a sample of the features on the upper east side. 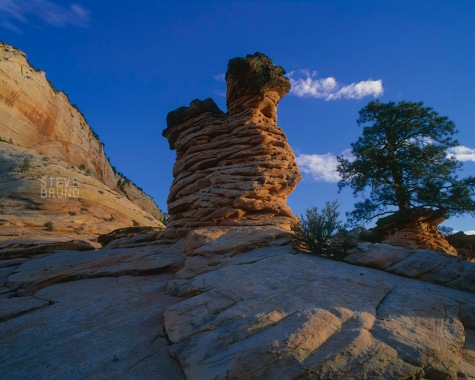 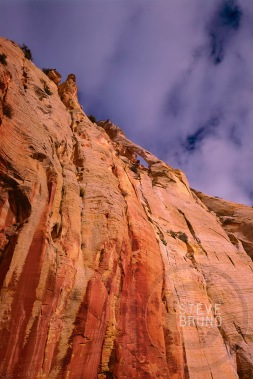 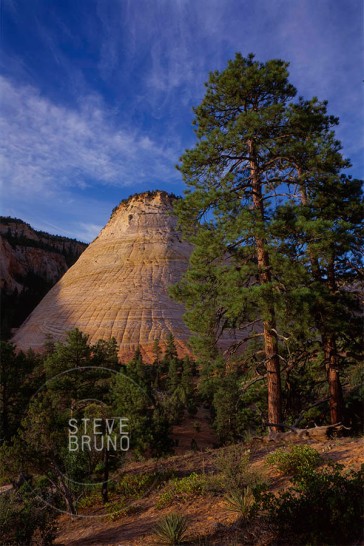 I find that natural arches usually frame the surrounding scenery very well.  The photo above was taken from underneath Devil’s Bridge, near Sedona, Arizona.  I was fortunate to have just the right amount of clouds helping to fill the frame.

Cave Creek Canyon, in the far southeastern corner of Arizona, is named for all the openings that dot the canyon walls.  From far inside one of the larger openings, looking back into the canyon, I loved how this shot is framed. 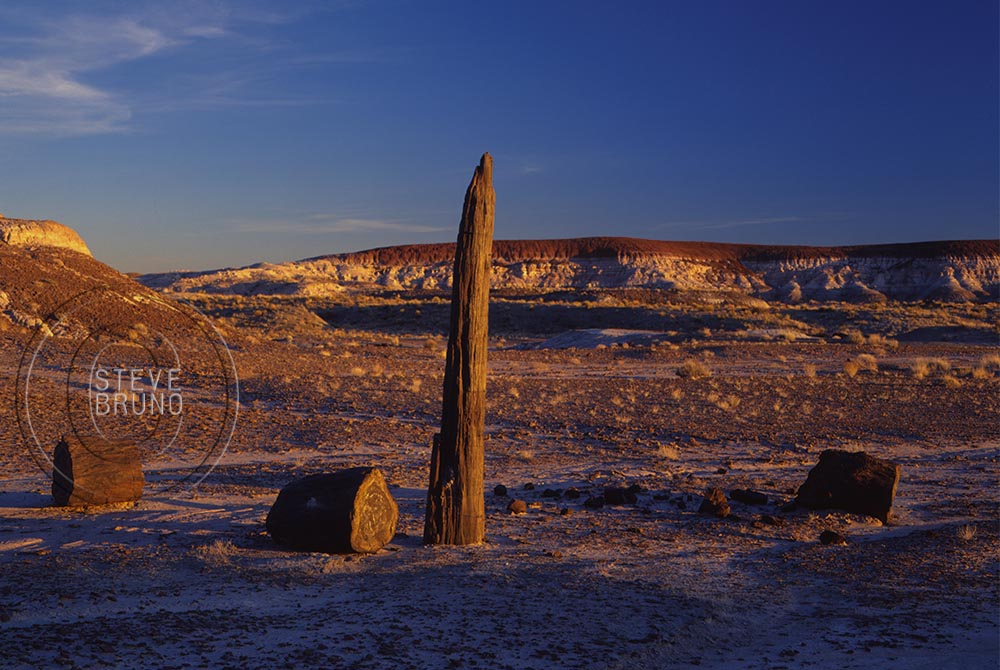 Quite a few years ago, my brother and I went on a weekend trip through northeastern Arizona.  One afternoon, we went hiking in at Petrified Forest National Park.  The trail was difficult to follow, so we gave up trying, and just started heading off into the backcountry.  Petrified Forest NP, which lies in the middle of the Painted Desert, has hills that can look the same very quickly, and is not the place for an inexperienced hiker.  After about a couple miles of this, we knew it was almost time to turn around, when something caught our attention.  As we got closer, we couldn’t believe our eyes.  There were two standing petrified trees!  Although one was more like a tree fragment, the larger was about 9-10 feet tall.

As you take the driving tour through the park, you will see the petrified logs laying on the ground, with some I’ve seen 40-50 feet in length.  I haven’t covered every square mile of Petrified Forest National Park, but I’m pretty sure these trees were the last ones standing.  That day was a complete adrenaline rush, but both my brother and I knew we had to come back and see this again with different skies.

It was almost a year later when our schedules coincided and we had dramatic skies to photograph this rare find.  It had been a wet winter, and the washes still had water as we headed into the backcountry.  Like I said earlier, the hills can look alike, and we were having trouble locating the trees.  We were joking that we were losing our tracking abilities, but then we discovered why we were having difficulty.  The taller of the trees was no longer standing.

As I mentioned, it had been a wet winter, and the soft soil of the Painted Desert captures impressions very well.  When we arrived at the fallen tree, there was a lone set of footprints that wandered towards the tree in an almost drunken fashion, stopped at the tree (easily in arms reach), then continued onward.  When this tree eventually fell, I figured it was going to be towards the right (top photo), but it had fallen to the left.  More importantly, it fell away from the footprints.

I find it highly improbable that this tree stayed upright for so many centuries, then fell on its own within the next year.  The footprints and the direction of the fall lead me to believe it had assistance.  This seems like the senseless destruction that only a young male would do, but then the story about boy scout leaders toppling a boulder in Goblin Valley, Utah a couple years ago makes me wonder.  They were both in their 40’s, and supposed role models, but look like immature teenagers in the video.  Their excuse was “we didn’t want the rock to fall on someone and hurt them”.  Sounds like the bullshit their lawyer fed them.

In the case of the petrified tree, the footprints wandered further into the backcountry.  I honestly hope that the asshole who did this was drunk and couldn’t find their way back, and ended up being a good meal for the coyotes and buzzards.  At least there would be some purpose for this waste of life.

Even with the photos I did manage to get on the first trip, it took a couple tries before I had one published.  Ironically, on the day after the magazine came out, I received a phone call from a photographer who gave me a long winded story when I inquired about one of his locations.  For a brief moment, I felt like sending him on a wild goose chase, but I was still disgusted over this, and just told him how there was nothing left to go back to.

This is one of those rare times when the last shot of the morning turns out to be my favorite.  I had been up for sunrise, near that hill in the lower part of the frame.  The first minutes of daylight had a powerful glow, with just enough clouds to add some life to the scene.  As the morning progressed, the light continued to change with the building clouds.  After taking photographs for more than 2 hours, I thought I had exhausted all the possibilities, and was heading back down the trail.  I turned around in time to see this, and fire off a couple shots.  The saturation didn’t have the pop that was present in my early morning pics, but that didn’t matter.  I knew right away this was meant to be in b&w.

You will see this photo along with those of other bloggers in Leanne Cole’s Monochrome Madness this week.

I truly enjoy spending time in the great outdoors and taking photographs of nature, but I’m not sure any of those photos convey a sense of fun.  Sometimes we just want to feel like the kid swinging from the rope, ready to release and splash down into the pool.  Maybe there’s an image of your kind of fun in the gallery below! 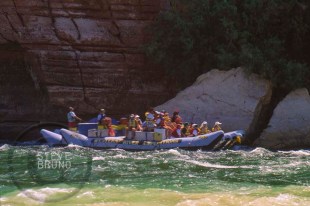 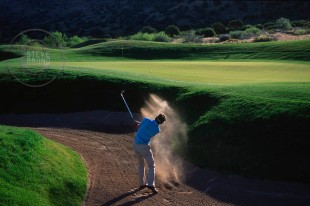 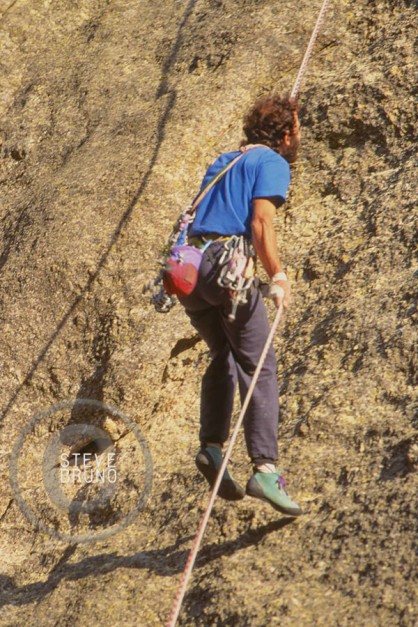 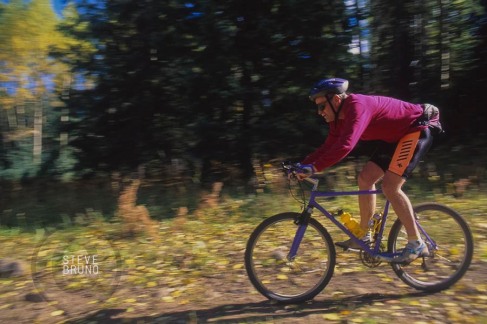 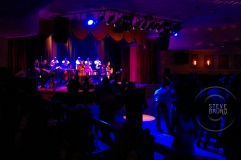 As I developed as a photographer, it was evident that I was becoming more of a morning person.  Part of this was due to the fact that I was living in the desert, and hiking and just being outdoors were limited to mornings on many summer days.  When I say morning, I really mean from an hour before sunrise to about an hour after sunrise.  That’s when the light can be truly amazing.

As I started travelling to the National Parks and other highly popular areas, I really appreciated the diminished (and sometimes lack of) crowds first thing in the morning.  I can understand being on vacation and wanting to sleep in, just not if you’re a photographer.

That brings me to my photos for this week’s challenge.  I was on vacation in Hawaii with quite a few family members.  We had been to this spot the day before, and I just looked at everything and knew I had to come back for a sunrise.  Upon returning to our rooms, I said, “I’m going back there first thing in the morning, who wants to join me?”  As I expected the answer was pretty much silence.

I arrived at the parking area just before sunrise and took a couple shots before hitting the trail.  It was a fairly short trail which descended a couple hundred feet to the beach.  It was a very relaxing, almost meditative, morning on a beautiful black sand beach.  About an hour later another person came down the trail, and by that time I was ready to head back.

I generally don’t like to wake to an alarm clock, but for occasions like this, I am glad to make exceptions.