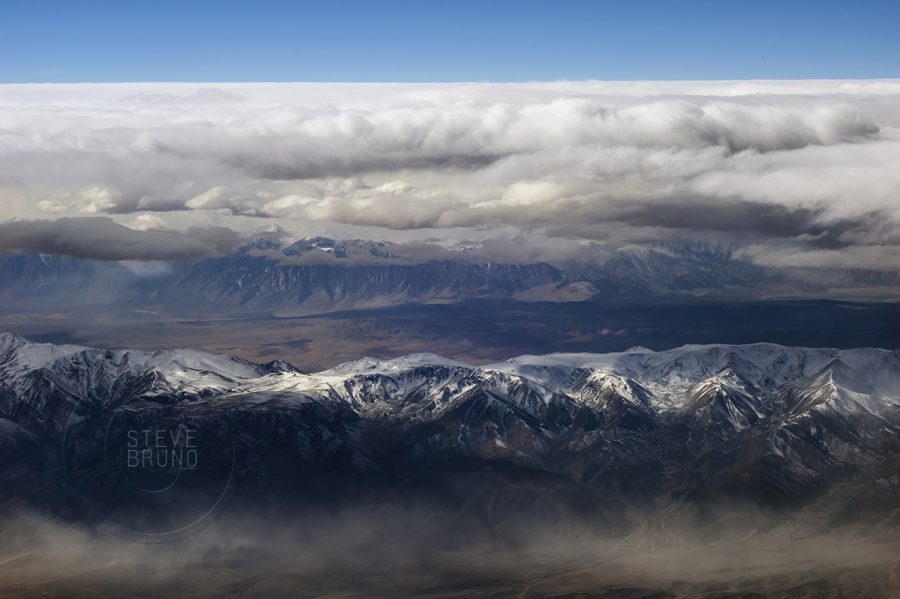 The territory covered on the flight from Las Vegas to Seattle can be quite spectacular, and my recent trip along this route coincided with the arrival of a storm front that allowed me to capture some of my favorite images ever from the air.  We had passed Death Valley and still hadn’t reached full altitude when we came across this scene.  I probably would have been thrilled to be on the ground for this one, especially if I were close to one of the snow-capped ridges in the distant range.  Stepping back and seeing the whole picture can be good once in a while, and in this case, seeing below the clouds and the top of the approaching front made for a unique perspective I was glad I was able to photograph. 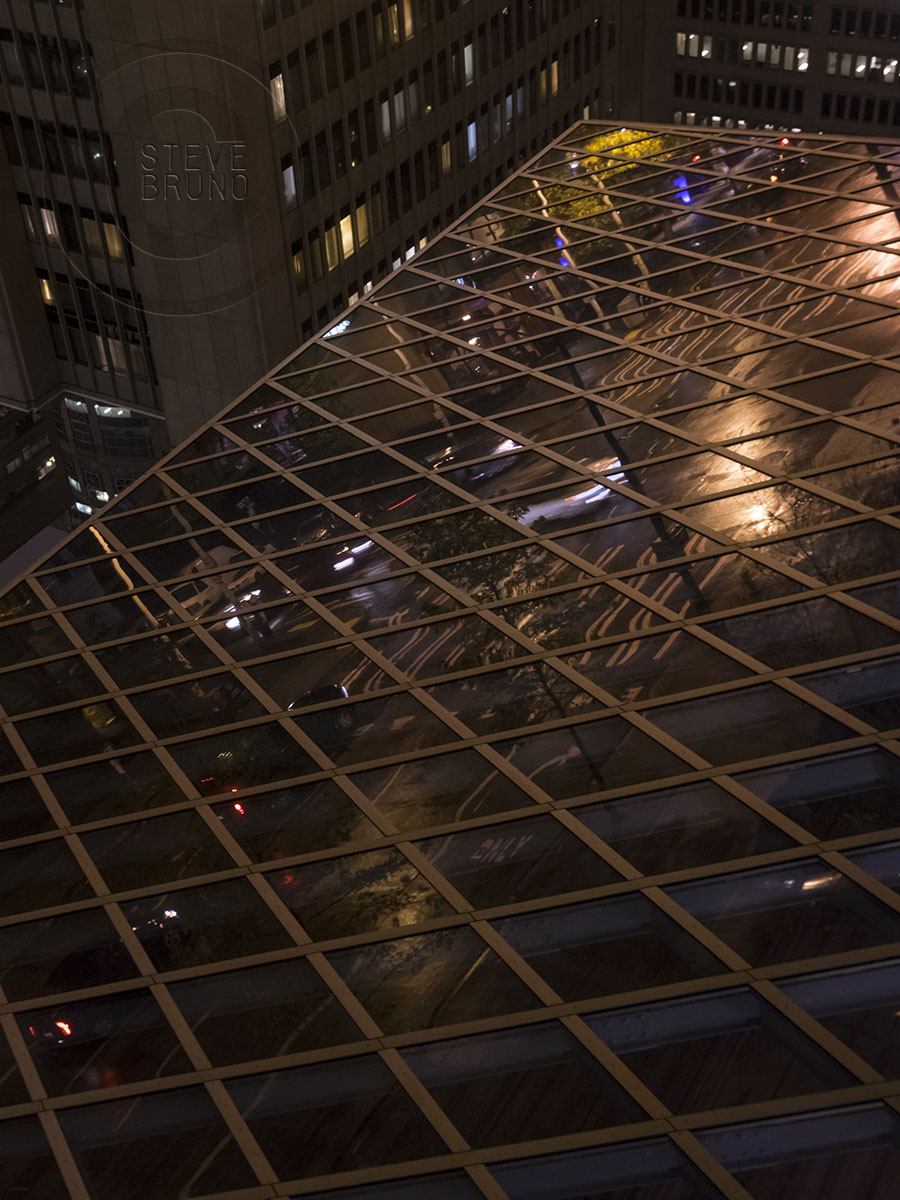 As I ventured around Seattle, I was fascinated with the patterns and textures of the buildings.  Maybe that’s because I live in a city that lacks older genuine buildings.  As with yesterday’s post, the lack of rain made all this possible.

I thought this place was supposed to be dark and gloomy

The day before I headed off to Seattle, I checked the NWS forecast – Rain 100%, or Rain Likely every day.  I didn’t think there would be much chance for photography, other than a few window seat shots (more on that to come).  Oh, there was some rain, alright (see previous post), but there was much more time when it wasn’t raining.

I think the biggest surprise was that there was plenty of autumn color still.  Much of the country has seen the leaves all go away, and this is when the lowest deserts are starting to peak.  Somehow Seattle, despite being this far north, and despite all the rain and wind, manages to hold on to autumn.

It was evident that I would have a reason to take my camera out before the plane even touched down.  As soon as I was checked in, I grabbed my camera and started walking around.  I saw a small group of trees amidst the tall buildings that were in various phases of changing color.  I didn’t realize that I had stumbled upon Freeway Park.  Appropriately named, the park sits above the freeway running through downtown Seattle.  Many of the foliage shots I took were in this park.

Most people think I’m crazy when I say I enjoy going to Seattle in November.  And that’s before I tell them I also enjoy walking around in this weather.  My attitude might be different if I spent months here, instead of just being a visitor.  I grew up in the Midwest, and remember long periods of dismal weather, and from that experience, I also remembered how to dress appropriately.

On this particular evening, I was walking around with just my phone in its Otterbox case.  The rain was coming down at a substantial clip, even for Seattle.  It rains much harder in the desert, but that’s usually for about five minutes.  After I took the shot above, it occurred to me that I should head back to my hotel and grab my real camera.  By the time I did, the rain had reduced to the standard drizzle.  It never did rain again at night while I was here.

Window Seat III – Above The Clouds

When I’m flying, I spend most of the time with my eyes peering out the window, fixated on the shapes of the landscape only available through an aerial perspective.  Every once in a while, it’s the clouds, not the land that captures my attention.

The photo above, was taken over the waters of the Gulf of Mexico.  In the absence of any features of the land, the shadows of the clouds stretched uninterrupted across the open water in the late afternoon.

Also in a late afternoon setting, the plane had turned perpendicular to the line of the sun, allowing for this lighting pattern on the top of the cloud layer. I’ve seen this effect on takeoffs and landings emerging through low clouds, but not from this height.

Then there are the occasions when cloud layers become prominent, creating a depth as rich as any landscape.

Last week I was in Florida again, and I had some time to try to capture images of the ocean.  In many parts of the world, there are rock formations in the water or dramatic cliff backdrops, which offer more options for composition.  The lack of any terrain made for more challenge, and the texture of the water became my primary focus.

In the top image, I converted it to b&w, and was mildly pleased with the result, but then decided to return the sky back to color in a new layer. I did make some minor cooling filter adjustments to the layer.  I was about to remove the ship because I didn’t feel it was close enough to add to the scene, but then decided to leave it for its sense of scale.

I am often intrigued by other photographer’s shots of powerful waves crashing explosively into rocky shorelines, but I never knew there could also be interesting detail in a one foot high wave breaking onto a sandy beach.  I’ve spent a lot of time using slow film in low light situations where blurred water results were common by default.   A fast lens/high shutter speed combination allowed for detailed captures, and is something I will look for more often in future photo shoots.

There was a significant amount of human activity, as one would expect.  One morning, this paraboarder was getting his workout, making several passes along the beach in front of me.  As I took one sequence of shots, a plane was taking off from the airport behind him.  Around the same time, a tractor was making a clean sweep of the beach.  The ocean is always busy churning out its natural waste, which doesn’t make for postcard beaches!

In the end, the shots I liked the most occurred where there was texture on the wet sand or in the rolling water.  One thing that doesn’t show up in the photos is the abundant humidity.  The sea breeze made it enjoyable, but anywhere away from that was not pleasant.  I’m very glad to be back in the desert now.

There are places where it seems you have to fight for elbow room to get your photographs, nowadays.  Most national parks come to mind, but even those have room to venture about, unless you’re looking for that classic shot.  In autumn, places like the Maroon Bells in Colorado, and Oak Creek Canyon in Arizona are just as packed as any national park in peak season.

I’ve always liked finding hidden gems, and this place, Jacob Canyon, certainly comes to mind.  In between Grand Canyon, Zion, and Bryce, there’s little chance of it becoming a destination for many.  The canyon runs for some distance, and is a great place to just get out and walk in the fresh air.  The area that the leaves change is quite condensed, as the forest is dominated by ponderosa pines.  To me, its main beauty is that I can have the place to myself most days of the year.