There have been a number of times in the last couple years – most notably during my recent injury recovery – where I didn’t pack a camera for a hike. Using only my iPhone for pictures, even with an app that allowed for manual control and RAW capture, ultimately left me disappointed. A friend suggested I look into a newer phone, but after much research I realized that even the latest and greatest still have the same root of the problem. A tiny sensor.

When I have an image that I really like, I want to print it, and want to see it large. I had not looked at point-and-shoot cameras for many years, and thought I should check out that market. A larger sensor and a real lens was what I was interested in, and eventually found what I was looking for in a Panasonic Lumix LX10 with a Leica lens. I was looking to replace using a phone, but the results of this camera could almost make me stop using my real camera. Almost.

In comparison to an iPhone, there really is no comparing, so I’m looking at results next to a full frame DSLR. There is a slight amount of noise that I don’t get with full frame, but that can be easily fixed in processing. The lens is somewhat wide angle, but doesn’t have the coverage of the extreme wide angle lens I use most of the time. And the macro capabilities of this lens don’t get as close as my favorite macro lens. That’s about all I can think about on the cons of this camera, unless it’s possible to be too small or too light.

I have already posted some photos taken with this camera, including some of the nighttime shots on a recent post. Those, and all on this page are hand-held. It also takes some excellent quality 4k video. Now when I go on a hike where I wasn’t expecting to see something photo-worthy, I won’t be disappointed because I packed light. My friends have never been too vocal about it, but every time I’ve stopped and pulled out a tripod, they were probably thinking, “Go small or go home”

About a month ago, when things were still cool, I returned to a hike I had done three weeks prior. In a spot close to where I encountered a dragonfly on that previous visit, I saw this hummingbird. He had little tolerance for me being close, so this was through a decent telephoto lens. The tree he was favoring was swaying in the breeze, so he was moving in and out of the shadows while he perched on this branch. I just kept clicking until I was sure I had some variations I liked.

As with most of the world, Las Vegas came to a screeching halt this spring. Getting out of the house for exercise was encouraged, and as I mentioned before, bike rides were part of that agenda for me. The weather was still cool for much of the stay-at-home period, but riding around my immediate neighborhood leaves much to be desired. I realized it wasn’t much of a ride to get someplace that most of us avoid like…..well…..the plague.

The Forum Shops at Caesar’s Palace, which once held the distinction of being the most expensive retail space in the US, had a mostly empty sidewalk, with some occasional joggers, pedestrians and dogs. You would never see this most times of the year. Just down the street, Fashion Show Mall was just as quiet.

There is one spot that is almost always guaranteed to be busy, no matter what the temperature or time of day. The infamous sign. Other people were here when I took these, casually taking their time with lots of photos and videos, a luxury not allowed when there are 50 people waiting their turn. And yes, I was standing in the middle of the road with a tripod for the street view. This was only around 9 o’clock at night!

When I first started my LV Blvd bike rides, I was mostly alone. There were a couple joggers, pedestrians, and another bike or two. There was a very pleasant period where the temperatures and cloud conditions made me opt for hiking instead, and when I returned, all of a sudden, bike riding the Blvd had become a thing. Hundreds of other bike riders were filling the sidewalks and spilling into the street. The mall had even opened up a parking lot to accommodate the riders. Still, it was a far cry from the usual volume of this road.

Construction was deemed necessary business during the shutdown, and shortly after my first ride, cones and zones became abundant. A short distance off the Blvd, the Las Vegas Convention Center was working on an expansion. This is the most scaffolding I have ever seen in one setting, and I think this photo would be a truly maddening jigsaw puzzle. 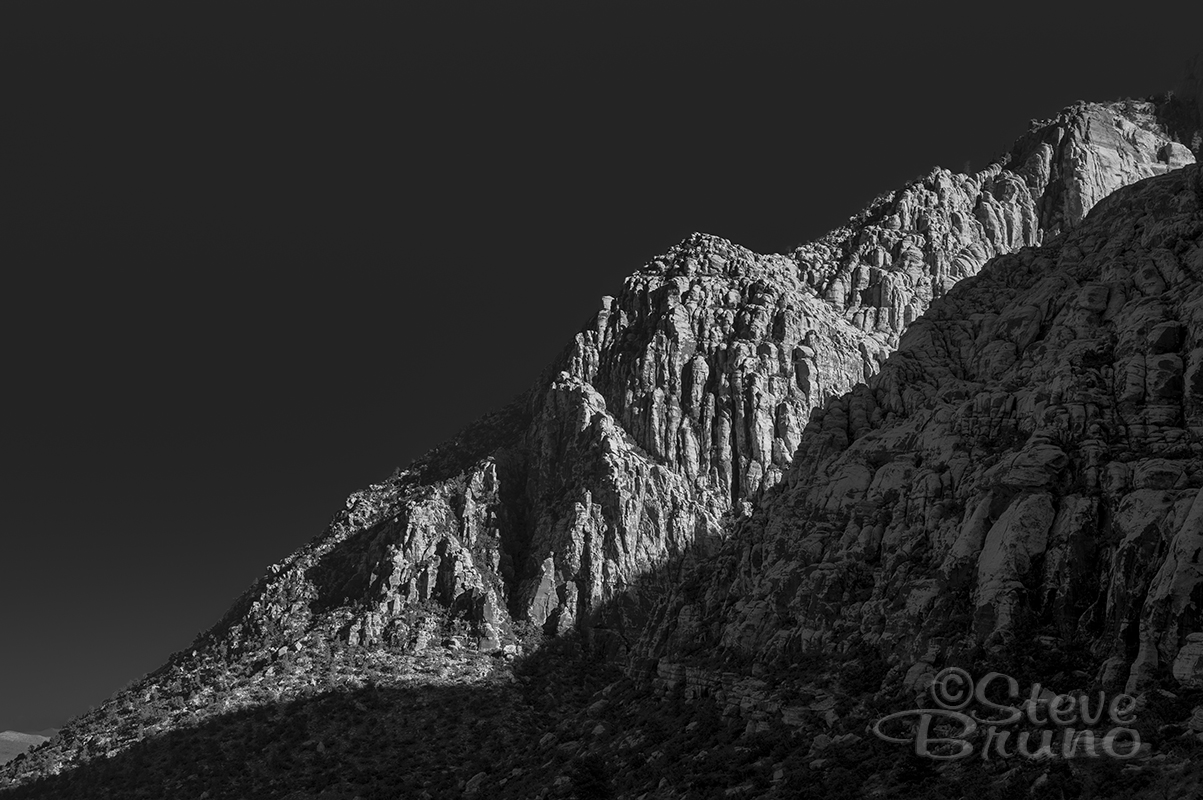 Yesterday I was out at Red Rock Canyon for the first time in a while…..with my car, that is. The scenic loop drive, closed to vehicles for over two months, has reopened. The new hours are from 8-4:30, also known as skin cancer time. Yesterday was the last time until October that anyone could be out during that time and not melt within an hour. At the entrance station, I asked the ranger why they even bothered opening the drive. I had arrived around 4 and he told me that if took a short hike, I probably wouldn’t get ticketed for after hours violation. Not feeling very comforted by those words, I stayed close to my car…..and waited. These photos were taken well after closing time, and I saw several other vehicles, but no ranger. It gave me an opportunity to play with camera settings I’ve never used before, but in the end, I used RAW images to get the results I wanted. I realized yesterday that we’ve been so spoiled by having bicycle access during the closure and for most of the day, making the drive kind of a letdown. 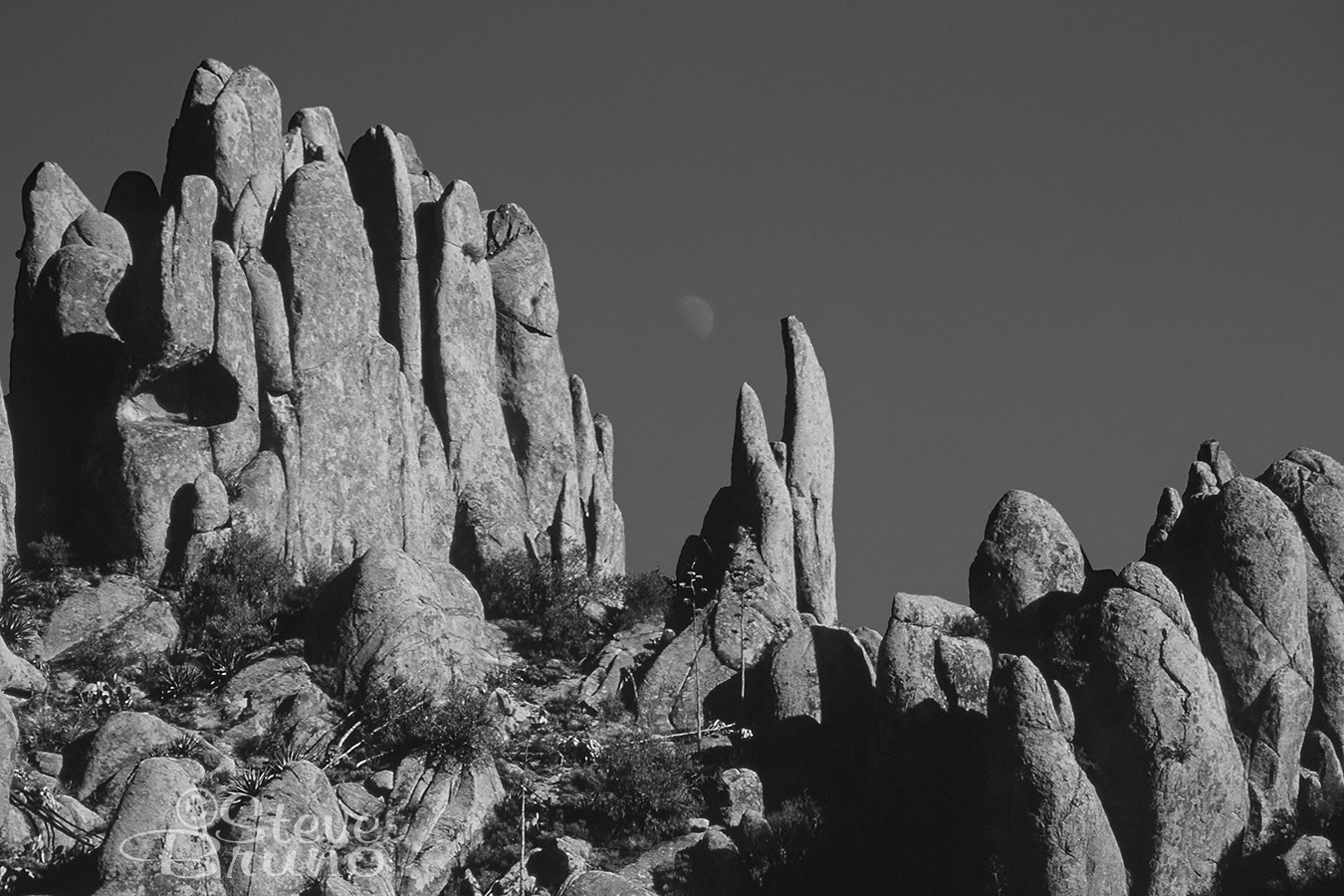 As with most people, I’ve had some time to catch up on a few things lately. I came across this photo in my files and thought it was perfect for a b&w conversion. This is a glimpse of some of the many pinnacles that decorate the summit of the Superstition Mountains near Phoenix, Arizona.

America used to be known as the Great Melting Pot. Nowadays it seems more like the Great Divide. Black versus white. Red versus blue. Social media was touted as the tool that would bring us closer together. Instead it has become a platform to try to make a stronger argument.

As I look back, I think I lived a pretty sheltered life growing up. There wasn’t much cultural uniqueness in our community. Friendships were made through neighbors or school acquaintances. Ignorance was common, and therefore tolerated. I didn’t know it, but I was living in an invisible bubble.

My move halfway across the country was initially for the purpose of education, but it was photography that became the driving force in my life. It was teaching me to see the world in new ways, then lead to several friendships. Those early friendships were mostly other photographers, but they soon led to connections and friendships with artists of different backgrounds who worked with varieties of media. Some of the best friendships in my life have been with amazing artists, people looking nothing like me, or having any real similarities. This pattern of keeping diverse people in my life has continued, but may never have happened without art in my life.

My first visit back to my home state that didn’t center on family was my ten year high school reunion. Most people in my class still lived within twenty miles of our high school, and were still the same idiots I remembered from a decade prior. As I met (mostly) strangers, I was asked “So what do you do?” followed 100% of the time with “Is there good money in that?”

But that wasn’t the biggest shock of the trip. Another student, also named Steve, was someone I had been in the same schools with all the way from kindergarden. By the time we were Seniors, he had a permanent scowl on his face and was dropping f-bombs most of the day. I’m amazed that he even graduated based on his class attendance and lack of participation. If you had asked me to name five students who I didn’t think would be there, his name would have been top of the list. I obviously recognized the face, but not the demeanor. We ended up talking for a while at the reunion. Turns out, he had moved about 100 miles away from where I was living, and he was telling me about how amazing he thought the desert was, especially the sunsets and the spring flowers. And, oh yes, art. That had been part of his therapy. The whole time I was thinking, “Whooaah! Who are you and what have they done with the guy I knew ten years ago?”

We were fortunate in that our school district had a solid budget and a variety of programs were available to the students. Photography classes were even added shortly after we graduated. That’s not the case for most schools nowadays, and art has often been the first thing axed. You can bet there were some irate parents in school board meetings saying things like, “Don’t waste my kids time teaching him/her how to paint or make baskets. They need to learn how to make money to survive in this world!” Early on, my own parents would be thrilled when I showed them the latest publication I was in, but the next question would be, “So why don’t you think about getting a real job?”

My chosen creative expression, photography, mostly involves nature. By observing nature, I have learned that it can be destructive, but then it has amazing healing powers. Often, things in nature have an outward appearance that might appear uninteresting or much the same. The closer you get to these elements, the more fascinating they sometimes become. This can hold true for people too.

No matter what form of art a person is involved in, it teaches patience. Even Picasso and Michelangelo didn’t create masterpieces on their first attempt. You have to start with a blank canvas and add layers. When you make a mistake, you realize you have too much time into the piece, and must find a way to fix it. Every artist I’ve met has become focused on their work, to the point they find it calming. Many artists utilize objects that the previous owners have deemed garbage. The ability to see an opportunity, where others have lost hope or interest, is a quality that all of us can use in life. If you make a living in art, it teaches you to save for a rainy day.

With all the artists I’ve known through the years, we always took time to learn from each other. We may not have thought it was the other person’s best work, but we would listen to their reasons for creating the piece, and provide honest and helpful feedback in order for each other to grow. Seeing things from another’s perspective may be more important now than ever. Perhaps it’s time to bring art back to schools, the benefits were there all along. We won’t solve the world’s problems with art, but it might be a good starting point to see that we are different, yet not so different.

In this time of unrest, it would also be important to know that art can teach you how to make a powerful statement without raising your voice.