As summer drags into its last month (in theory), we here in the desert are looking forward to a change.  Normally the seasonal monsoon rains have their rhythm going by now, and lowered the fire danger and temperatures (ever so minimally).  Even if the rains are few and far between, the clouds offer some relief as well as photogenic backdrops.  On the occasions we have had clouds and rain, the storms started early, and were finished early.

This time of year, it’s nice to get away to the mountains for some relief.  A lot of other people have the same idea, so when I go, I usually find some rough, isolated road to get further from the crowds.  Because the fire danger throughout the west remains high, and most fires are human caused, I no longer feel comfortable doing this.  I never make campfires wherever I go for environmental reasons, and I don’t understand why anyone would need a fire when it doesn’t get below 50 degrees.  I think this was a tradition started by people in old western movies that needs to go away.

For now, my photo trips have been limited in number and almost exclusively on paved roads.  These photos are from late spring in the desert of western Arizona.  The yuccas are the last thing to flower in the desert, with the blooms taking place over an extended period, depending on the right conditions for each plant.  As I approached the plants below, there was a definite buzz in the air.  The bottom photo is a crop of the one above it, so you should be able to see the bees more clearly.  Ive photographed these plants in spring before, and never remember encountering a single bee.  About 100 feet away was a similar plant with fresher blooms, but no bees.  I guess this is what happy hour looks like if you’re a bee!

After having spent most of July in Oregon and Hawaii, I have to admit I’ve been a bit uninspired to head out into the desert.  Last week we had a beautiful day that started out with clouds and rain, and I made a relatively unplanned tour through the desert.  One of my stops was at Pahranagat National Wildlife Refuge along the Great Basin Highway.  I probably would have seen more wildlife if this hadn’t been towards the middle of the afternoon, but tall shade-providing trees, roads lined with sunflowers and small lakes were enough to soothe the senses.  The breezes would occasionally find a lull, and the clouds were just enough to provide a little contrast for my photo here.

You can see this photo on Leanne Cole’s Monochrome Madness this week.  To see what other photographers have contributed, or instructions to join in, please visit her website. 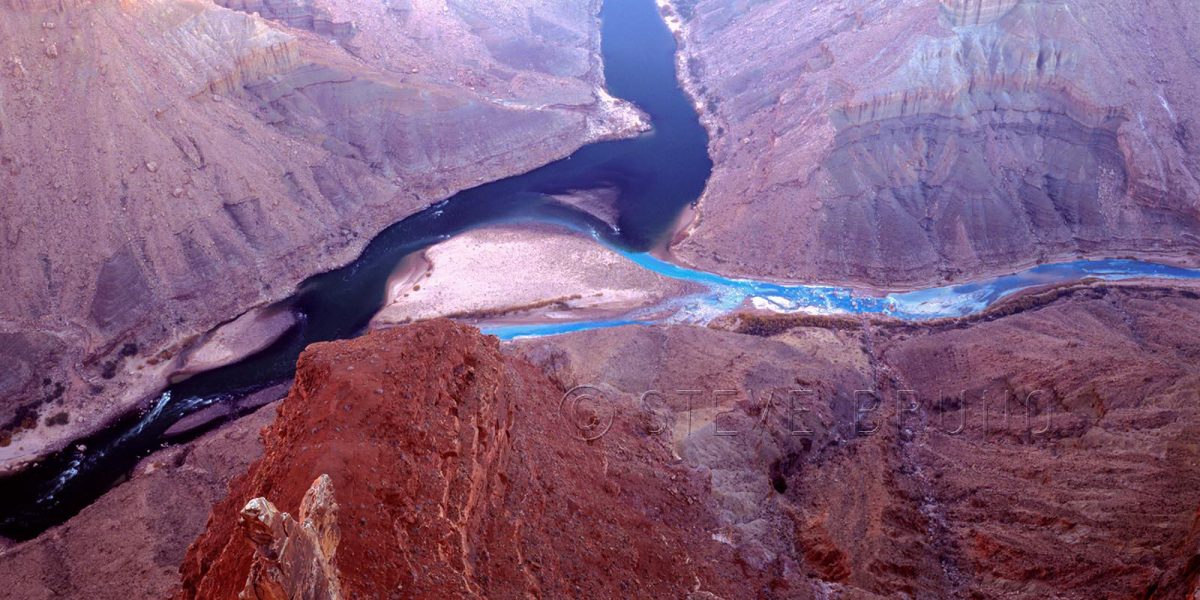 The Grand Canyon is one of earth’s special places, and even in special places you come across spots that are extra incredible.  The photo above is the confluence of the Little Colorado and Colorado Rivers in Grand Canyon National Park, Arizona.  During the majority of the year it looks like this.  The turquoise colored waters of the Little Colorado, coming in from the right, are fed from a highly mineralized spring about six miles upstream.  The Colorado’s waters come from Glen Canyon Dam, which filters out most of the sediment, leaving a deep green hue to the water, when the sunlight hits it.  If there is a flood in the vicinity, either, or both, will turn muddy before returning to this two tone mix.

For this week’s challenge, I thought the changing of the Little Colorado’s waters after mixing with the larger volume of the main river showed the visual aspect of change.  But there’s a far deeper issue of change at stake.  The photo above is in National Park property, but about a mile east, just outside the right edge of the frame, is the boundary with the Navajo Indian Reservation.

A project called the Grand Canyon Escalade is still being considered to be built in the Navajo lands at the edge of the national park.  The project’s main feature would be a gondola estimated to bring up to 10,000 people a day into the canyon.  At the bottom would be restaurants, shops, an amphitheater and elevated riverwalk.  You can also add toilets and garbage to that list.  On the rim would be hotels and an RV center plus more of the previously mentioned items.  They seem to have omitted where the water supply would be coming from.

The Escalade idea came from developer R. Lamar Whitmer, with the project offices based in Scottsdale, Arizona.   Mr. Whitmer has several arguments for his cause, including making this area “accessible to those who might never get to enjoy the tranquil isolation at the bottom of the canyon”.  Have you been to Mather Point on the South Rim, Mr. Whitmer?  There can easily be a thousand people there at sunset, and the words “tranquil isolation” are the furthest thing from my mind.  I can’t imagine experiencing tranquil isolation with thousands of strangers in this tight little pocket of the canyon.  That is where raft trips fill the need quite well.

The major selling point of this project was jobs for the Navajo Nation, where unemployment is incredibly high.  Nobody could possibly be against that, or could they?  Written into the contract is a non-compete clause for 40,000 acres along access roads.  It seems all those jewelry stands run by nearby families would have to go, among others.  And how about that corporate address?  I would have an easier time believing that the Navajos’ best interests were at stake if it was based in Window Rock, or Cameron, or even Flagstaff.  Are the Navajo workers supposed to move or commute to Scottsdale?  Or are the Navajos not even being considered for corporate level jobs?

This project is completely in the hands of the people of the Navajo Nation.  There is nothing that US citizens or the US government can legally do to prevent this from becoming reality.  The nearby Hopi tribe has no say in the matter, either.  The spring which feeds the Little Colorado is one of the Hopis’ most sacred sites.  Fortunately, newly elected Navajo President, Russell Begaye, is against the Grand Canyon Escalade.  This is probably the best news to come about since this idea first started.  His predecessor was completely for it.

In addition to the impact in the immediate area, this eyesore will be visible from many points along the South Rim, and those points on the eastern drive of the North Rim.  The spot I was standing, even though considered backcountry, used to have a rough road leading all the way out to the overlook.  Very few people knew of this, but it only took a couple of disrespectful people, having bonfires and leaving trash, to make it so you have to walk the last five miles now.  I wonder what the impact will be when the numbers are in the thousands?

I really don’t want to add this to my historical photograph collection.

In response to The Daily Post’s weekly photo challenge: “Change.”