“Get along little doggie!”

Or in this case, coyote.  At least that’s my best guess after an online search.  My first impression was bobcat tracks, but those turned out to be much different in shape.  This photo alone might be enough for a story, but yesterday turned out to be too good of a day to stop there.

The initial weather forecast called for the storm to be out of here before noon on Sunday.  I set my alarm, but then rechecked the forecast one more time.  The official weather station on Mount Charleston was at 37 degrees, and the satellite image gave me the impression the event was moving out quicker.  With that in mind, I changed the alarm to an earlier time, thinking the sunrise might be spectacular.  Upon shutting the alarm off and falling back to sleep, I awoke closer to my original plan, and decided there might still be some something worthwhile to photograph.  This just meant I would be joining all the weekend warriors.

As we headed up the mountain, we began to drive through a low cloud cover.  Even the tailgaters eased off as visibility became very limited.  Just before approaching the ski area, we emerged with a clear view.  I pulled off to the side of the road, as the freshly coated Mummy Mountain had great light hitting it.  In the time it took for me to cross the road and open up my tripod, the light was gone.  The fog we had driven through was racing up the mountainside.  Little did I know at the time that this was the last bit of blue sky I would see for the day.  That’s Mummy Mountain’s outline in the upper left corner.

Although I was a little disappointed, this was the view everyone else was getting, and I came out to hike a trail I’ve been on several times before – one that would take me up into the snow and the bristlecone pines.  When I reached the parking area, there was a vehicle with three young men already returning.  I was still reasonably early, and it wasn’t long before their tracks were no longer visible, and my feet were laying down the only marks in the snow.  This desert dweller hasn’t been in the altitude much lately, and my stops were numerous.  Taking photos was a good excuse to lengthen my stops, because I know I can’t take a steady picture without a tripod when I’m breathing that hard.  Especially detail shots with a telephoto lens.

The fog was varying in its density, and with each thinning stage, I thought that was going to be it.  The trail started around 8300 feet, and I knew I was up over 9000 feet.  The temps were too warm for the snow, and I could see clumps falling off branches all around me.  That’s when I came across the tracks.  Fortunately my lingering photographer’s pace was allowing other hikers to catch up to me on the trail, many with big dogs, and I knew my chances of becoming breakfast were diminishing.  In this area were many trees with intriguing shapes, standing eerily in the fog.  I took numerous shots in this area, then continued.  In a short time I arrived at the largest bristlecone pine on the trail, perhaps the largest I have ever seen.  Around this time the sun became visible, although the fog was still there.  I don’t think I have ever seen this tree under more perfect conditions. 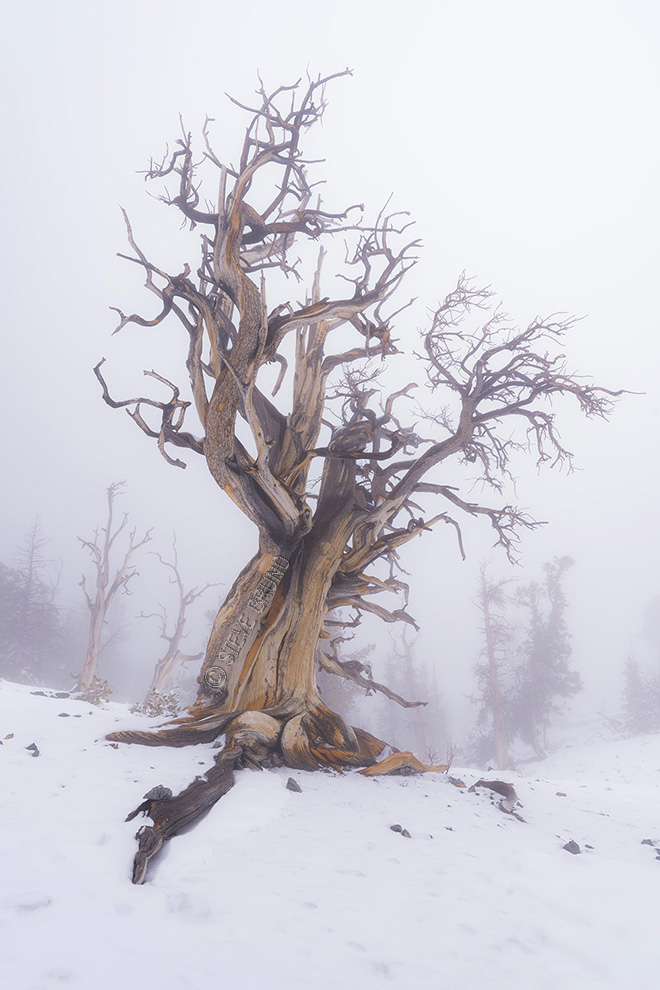 I continued along to an area I have stopped before. The fog gave this group a different light than any previous visit. 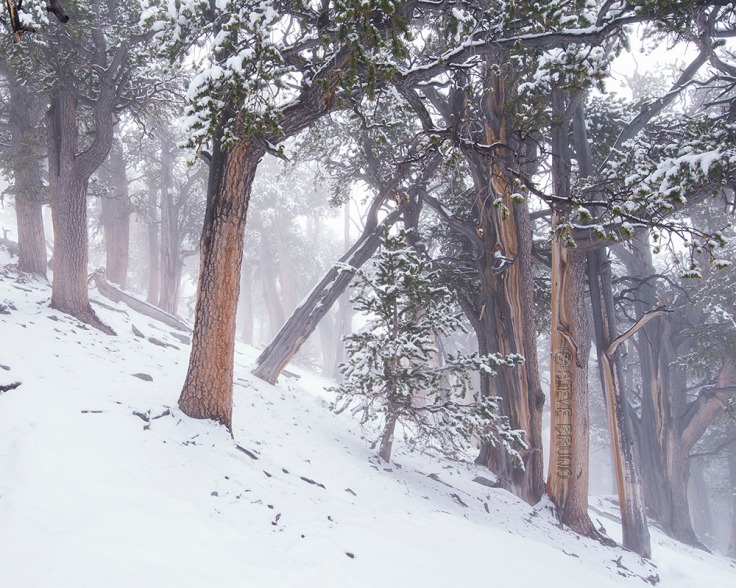 I tried continuing further, but this part of the trail, now around 9500 feet, had a little deeper snowfall.  And a steeper pitch with a slight sideways pitch.  That was becoming too much work without spikes under my shoes, so I headed back.  This turned out to be excellent timing, as the fog was making a comeback.  The trail was getting slippery and/or muddy in spots, I was starting to feel the fatigue of mountain air.  I could barely see the forest in the canyon right in front of me.

I made one final stop, and as I did the fog was now leaving many microdrops on my camera, though not my lens.  Those made for some excellent b&w images which I will post soon.  It was close to 2:00 when I finished, and the conditions were not what I was anticipating, but certainly made for an awesome day.