I’ve been crazy busy lately, so I’m trying to get caught up here.  In the final installment of the Daily Post Photo Challenge, they put up the topic of All-Time Favorites.  While I have posted some favorites before, these are mostly new to my blog.  I purchased my first real camera over 40 years ago, and moved into large format 5 years after that.  I have some favorites from way back then, and some that have made the ranks within the last year.  Choosing definitive favorites throughout the collection would be impossible, so here are a few from the top of my lists in various categories.

Living in the desert, flowers are a limited subject for me.  The top photo comes from the North Rainbow Trail along the Arizona-Utah border.  We had just dropped into a canyon whose entire bottom was layers of sandstone, when I spotted several Indian Paintbrush in bloom.  Who needs soil anyway?

One of the difficulties in photographing poppies is that they open up when the sun is stronger, then close by the end of the day.  Secondly, they appear in surroundings that are often not very photogenic.  Then, if those two come together, there’s the third variable of decent light.  I think I hit the trifecta when I photographed these poppies in the late afternoon, below a saguaro cactus studded hillside in the desert east of Phoenix, Arizona.  Just as I was setting up, a thin wave of clouds moved in as though someone were pulling a fine lace curtain over the desert.

Although I’m partial to the desert, my travels have not been limited to the warmer regions.  Anyone who has been to the Rocky Mountains in summer knows that you can almost set your watch by the afternoon thunderstorms.  On this mostly clear day, somewhere south of Telluride, I captured this favorite mountain scene as the sun was getting low. 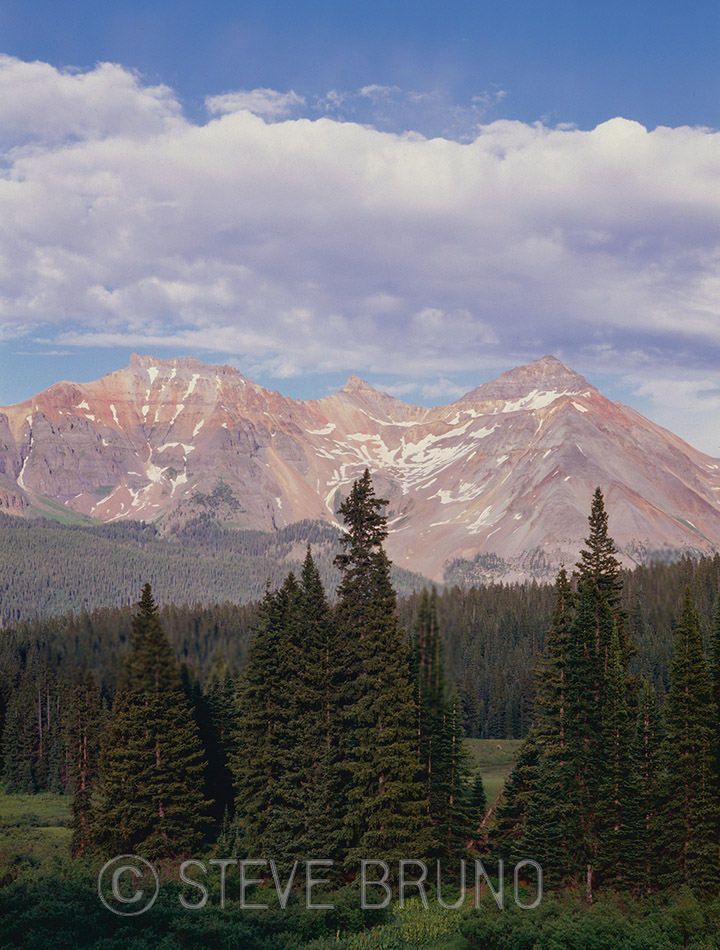 While the desert does contain a few, there are better chances of finding waterfalls in the mountains.  I think I always had a special place for this one because it was the first time I was able to get behind the falls without getting a wet lens.  Oh, and the light is pretty good, too!  From Rifle Falls, Colorado.

Another place having thunderstorms with clocklike predictability is southeastern Arizona.  While spending a couple very wet afternoons on Mount Graham, I woke up very early the last morning to capture the sunrise coming up over a fog-filled Safford Valley.  I have seen hundreds of sunrises and sunsets from beautiful locations, but this one still ranks high.

Seeing mountains from an aerial perspective can be breathtaking, but often too distant to see great detail.  However, mountains and commercial airplanes in close proximity is a bad thing.  Many routes out of Seattle pass close to Mount Rainier.  I was fortunate on this almost cloud free winter Seattle day (yes that sounds like an oxymoron) to capture one of my favorites from an airplane.

While many tend to think of Arizona as hot and dry, there are a few riparian zone gems to be found.  One of them, West Clear Creek, is a photographer’s paradise, as well as a great place to escape the heat.  This is one of my favorites for reflections, and pretty high on the list for canyon photographs.

The reason it could not take top honors for canyon favorites is because of the next place.  I have hundreds of Grand Canyon photos from various trips, and have seen many different faces that it puts on, but there’s nothing like being in the bottom and really appreciating its scale.

Water in the desert is special, but certainly not the norm.  The counterpart to creeks and rivers would probably have to be sand dunes.  This is truly impossible to pick a favorite, so here is one I have posted before.  From Death Valley at sunrise, I have never seen arcing ridges like these at other dunes I have visited.

Despite all the time I’ve spent photographing nature, with many great days, I have one that I still refer to as best day ever.  I left Las Vegas around 3 in the morning to head to Zion National Park.  I arrived just in time to get a glimpse of sunrise hitting the freshly snow covered mountains.  Once I started photographing, there was something to capture my attention around every corner.  Despite great light in the middle of the day, I had to force myself to go down to Springdale for some lunch before returning to keep clicking all the way until the sun went down.  I don’t think there were more than 20 people in the park all day long, and the rangers said they had never seen that much snow before.  Somehow, with the lack of people, I came across one scene that was up about two miles along a trail that someone had walked in the middle of for no apparent reason.  It was the most surreal image I had seen that day, and I was cringing because someone walked through it.  This was slightly pre-Photoshop, and if I had any idea of the changes that were about to happen, I would have captured that image and waited for technology to catch up.  I have no “outtakes” from that day.  If I had a digital camera, I can only imagine the volume of images I would have taken.  Perhaps it was the time-consumption of each setting with a large format camera that placed me in the right moment as I approached the next location at the perfect time.  One of my early morning shots made a cover of a national magazine, but the truth is they’re all favorites, so here’s one the world hasn’t necessarily seen yet.

26 thoughts on “All Time Favorites”